Admiral of the Fleet Cruise Center

We had some wonderful clients take a 111 Day World Cruise on the QE2 and they documented each day. Once home, they published their cruise in a book and sent it to us along with pictures they had taken each day. Needless to say, they had a great time and we thought it'd be neat to share their experience with you here. We'll try and add a "day" each week.

Interested in a World Cruise? We'd love to help make this once-in-a-lifetime event special for you - give us a call, we'd love the opportunity. In the meantime, enjoy this journal!! 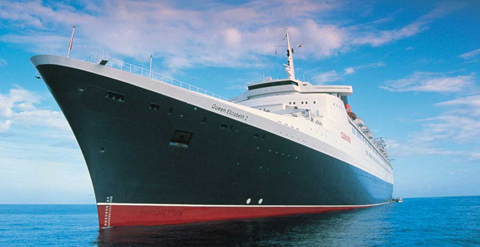 Good news, we think, about the pictures for some of you. It now appears (thanks to Lois) that the major problem lies with those who have AOL. Apparently, AOL reads the text + pictures as either junk or trash or spam and red-crosses them out. We are not sure how we can solve that problem for you from the ship...

It's good that you hear from us today since we'll be skipping tomorrow, the day we cross the International Date Line. Too bad we couldn't have skipped today! We are barely docked in Pago Pago. Due to wind with lots of rain, there's a tug boat holding us in place on a short pier. The dock here doesn't go the full length of the ship, from what I understand, so the tug is a good thing.

This is rain like we only rarely see at home but it is the wind that has the captain concerned. There is a tug constantly pushing the ship against the pier and he is not sure this is a good idea to do all day so we will hoist anchor just before lunch. All trips today were cancelled and everyone gets a refund. We will attach pictures/ video of the harbor and also of Pat's sweing room. So her agenda today will be sewing, a book, and the "Dukes of Hazzard" on the TV. For me, another book ("Hornet Flight" by K. Follett) and email later this afternoon just about does it. It still beats shoveling the driveway, although it appears that NYC is getting 60 degree weather which bodes well for Potsdam, I assume.

My first misconception was the name. This is actually "a" place made up of 320 volcanic islands, of which only about 100 are inhabited. the other one is that it in no way matched my imagination, built on the movie South Pacific, of hula girls, thatched huts, and other quaint things out of my junior high school National Geographic days.

Stop two was the Central Market in Nadi, which actually was a big souvenir store with a native Fijian standing guard outside. It was more fun that I had anticipated (this souvenir business really becomes a jaded one) because some of the wooden bowls, containers, and statuettes were first class. One of the woods reminded me of the Bill Sherman "distressed" wood - white with black lines through it.

We divided, but at least for me, not much conquered.

Hmmm. Bill's just given you the outline below of last night's special event and told me to fill it in. Before that, I need to add a little Personal Stuff.

Okay: Early in the meal the "head waiter" made an announcement that a silvery evening bag had been found in the men's restroom and could be claimed by seeing him. For some reason he sang a few measures of an Italian aria. We didn't think anything of that. After a while, je came back to say that the bag had been claimed... by one of the chefs. Somehow another waither who was French got involved with the act and they began a vocal duel over who wa the better singer and which nationality had the best arias, etc. They each sang. Very well! The argument continued and they finally decided to sing a neutral/ Spanish aria since of course they were best in their native tongue. Suddenly a third singer took over the Spanish one. He was the best, I thought! So we had The Three Waiters who apparently do this a lot. They did a couple of numbers together and brought down the house. It was GOOD! And in the end they all admitted they were Aussies.

Because I was so fascinated with her, whenever she appeared I was afraid to look at her for fear she'd figure it out. They eat in our dining room so we ahve seen them walking through the lounge off and on.

In the last week, I met her face-to-face, said good morning and she responded so she seemed friendly and unaware of my perverse interest. Well, last night when we found a table with 4 open seats, they were at it! Bill sat next to her and finally we asked where they were from: Itale, Milan, to be exact. We also learned she doesn't speak much English but that her cousing works for teh NY Times! And that her husband (?) wasn't well. She seemed quite solicitous of him. Ther're signed on for the whole trip but, she said, they might leave in Rome. Not bad for not speaking English, don't you think?

Unlike other Cunard tour events, this began with boarding our bus before the 8am scheduled time. First stop was to see teh gannets, a bird that migrates from Australia and is apparently procreating with enthusiasm. The beach on either side of our picture goes for miles and it and the surf were absolutely spectacular.

From there it was off to a working farm with sheep shearing, deer feeding, and landscaping of gardens and ponds that were terrific. Tea/ coffee with sandwiches and cakes were served at 10:15 but no departure until noon. Consequently, Pat and I got our walks off for the day!

HOURS
Monday - Friday  9:00am - 5:00pm
After hours, Saturday, and Sunday by appointment